Blackmores Glucosamine Sulfate 1500 One-A-Day is a one a day dose of glucosamine sulfate which relieves the symptoms of mild arthritis. 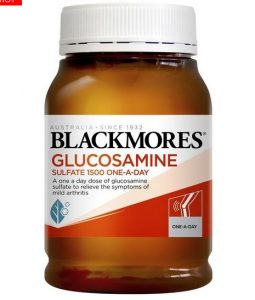 Store below 30°C in a dry place away from direct sunlight.Storage Temperature: Below 30°C

Glucosamine is a naturally occurring chemical found in the human body. It is in the fluid around joints. Glucosamine also exists in other places in nature. For example, glucosamine used in dietary supplements is often obtained from the shells of shellfish. Glucosamine can also be made in a laboratory.

Glucosamine sulfate and glucosamine hydrochloride are most commonly used for osteoarthritis. Glucosamine is also used for many other conditions, but there is no good scientific evidence to support these uses.